The answer is yes! Top-nailed floors are making a come-back and are very much in vogue. When hardwood floors were being installed originally the planks of hardwood were put over a dirt floor. Foundations and subfloors came much later and installers began to lay hardwood floors to a subfloor. This was done by hammering nails rounded head nails through the top of the wood and into the subfloor. This process is referred to as top nailing. This type of installation can be still found in Antique homes.

Later came the tongue and groove method of hardwood flooring. Each plank has a tongue that sticks out of one side and a groove that fits the tongue on the other. You lay it down and then fit the tongue of the next plank into the groove and the nail was driven into the planks at a 45-degree angle. The angled nail is below the surface and thus hidden and top nailing was made obsolete.

This has been the preferred method for affixing a plank to the subfloor for decades now. Top nailing is resurging though.

The most common type of hardwood flooring now involves tongue and groove boards. That means each board has a projection on one side and an indentation on the other side. The boards fit together to form very tight seams. The hardwood planks are affixed to the floor by nailing into the groove at a forty-five-degree angle. This is called blind nailing the floor. Since the nail goes into the groove, it never actually protrudes from the surface of the wood. That means that you never see the nails once the floor is installed, hence the name. However, tongue and groove boards did not become popular in the United States until the late 19th century and early 20th century. Before the time of tongue and groove boards, the most common were straight boards.

Straight boards are simply planks of wood that have square sides. To install the flooring, the crafter would lay the wood down and then simply nail through the top of it. The nails were visible above the surface of the wood. Typically, the nails would have rounded heads. The look is very iconic of colonial and antebellum homes. It is not very common today but it is growing in popularity. Everything that was once done out of necessity and eliminated by technology eventually becomes popular once again. The same is happening with top-nailed flooring.

The look is very rustic and iconic. If you want to get the look, you have several options.

How to Get the Look

To get the look of top-nailed floors, you can actually top nail the floor or you can just mimic the style. If you want to just mimic the style, you will install tongue and groove boards as per usual. You’ll even have them blind nailed to the subfloor. Then, you’ll drill tiny holes in the surface of the planks. You’ll nail into the floor the nails you want to be visible. They’ll likely serve no practical purpose, but they will look great. If you’re not nailing them all the way into the subfloor, you might need to use some wood putty in the drilled hole to make sure they stay in place.

Alternately, you can actually top nail them in a functional way. You’ll likely still use tongue and groove boards since those are by far the most common boards. You’ll then choose nails long enough to nail all the way into the subfloor. Make sure you choose ones that have nail heads to match your decor. Tiny pilot holes keep the wood from splitting. Nail them to the floor, and you’re done.

What Are the Benefits?

There are a few advantages to top nailed floors. If a plank needs to be repaired or replaced the adjacent planks to not have to be removed. On the other hand, if the floor was side-nailed, you would need to remove the adjacent planks as well. With a top nailed plank, you simply pull the nails out and lift the plank out, making a repair or replace much easier.  Just imaging how much easier it would be to dry out a subfloor if moisture got underneath the planks. You could just pull out planks in a few places and then use a fan or some other method to dry the floor. Since the moisture would have an easier path to evaporation, it would dry much faster.

If you find the return of top nailed hardwood floors exciting and that they are for you, you can rest assured that not only will you get a sturdy floor but also be seen as a trendsetter. If we can assist you with your flooring needs or answer any questions you might have, be sure to connect with us here.

Thank you for your business 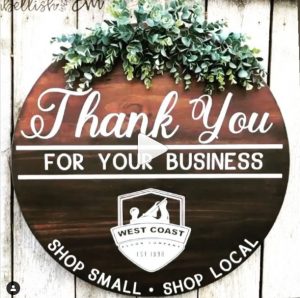 Recent reviews from our customers 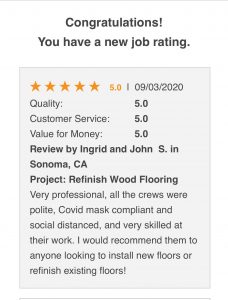 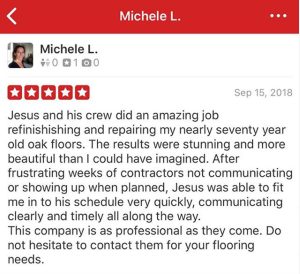